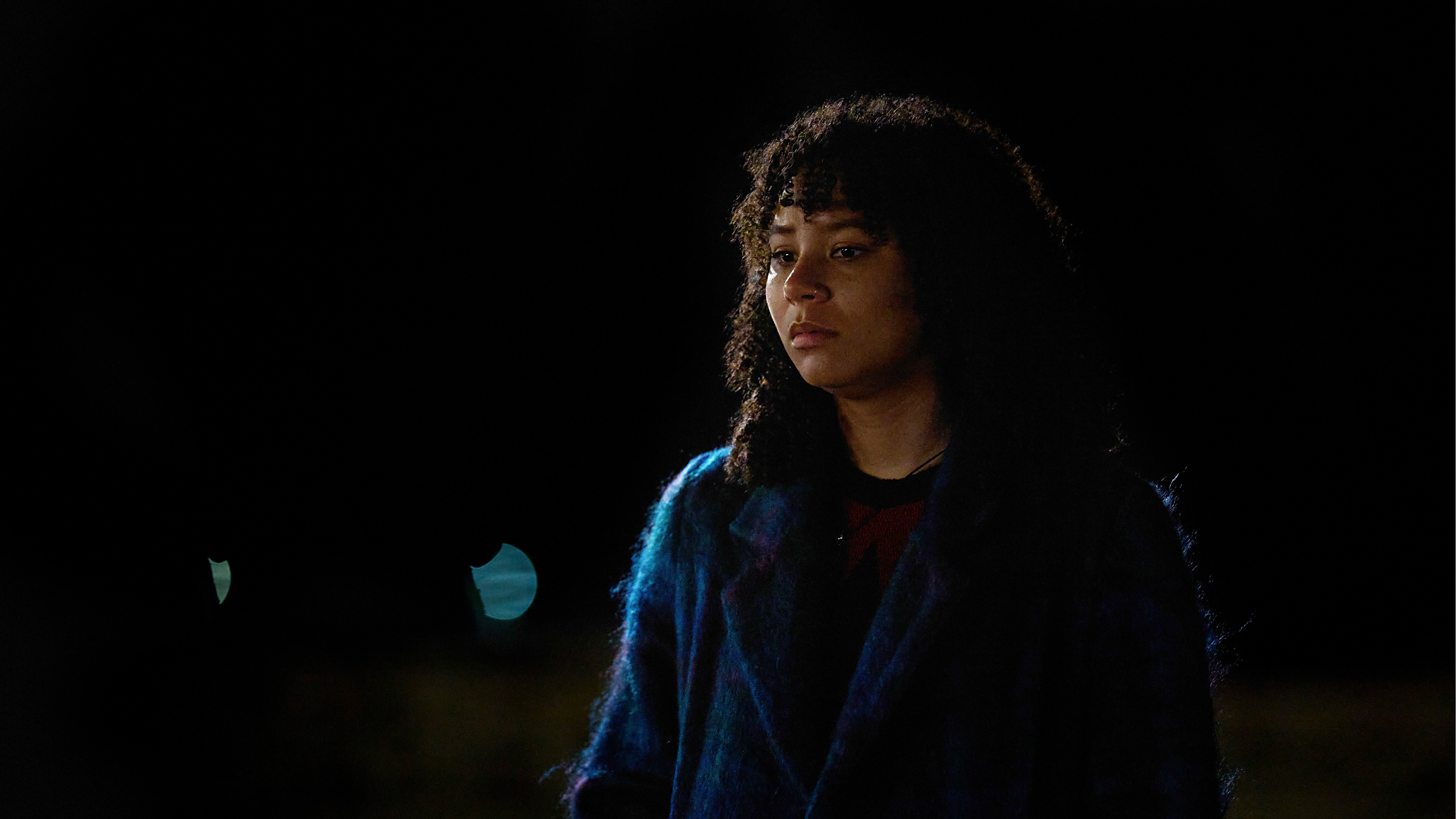 What were you able to bring of yourself and your own life experience to this part?

Megan is definitely going through the quarter-life crisis, which I can relate to. There is an uncertainty about what exactly you are meant to be doing and where you are meant to be in life. Megan is trying to fight against these responsibilities, unsuccessfully, but as she gets to know herself better, she can then start to face those things.

You share the same surname as Megan. Did writer Pete McTighe change the family name to Rees once you were cast?

I don’t know if it was on purpose. It was especially strange when we were looking at our dead brother’s grave, Liam Rees, because Liam is an anagram for Mali. So, it was like I was staring at my own grave, which helped with the scene. It’s a strange coincidence. It was meant to be.

Megan’s bedroom is a chaotic space – the walls plastered are with lights and photos. Were there production design details that you found really helped with the character?

I didn’t get to see her room until a few weeks in but when I did, I was like, oh yeah, that’s spot on. The main thing for me was seeing my black hair products in the room. It was like, oh wow, they’ve made that effort. And they had silk pillowcases, which is what I sleep on anyway for black hair. It was that attention to detail that meant a lot to me, both as an actor and for those people watching at home, that it will look more authentic. These things are so often forgotten. I think that’s true across this production as a whole, I have never worked with such a diverse crew, cast, everything. It is so rare to have so much crew from different departments be from different backgrounds.

How is Megan feeling about her life when we first meet her?

She’s fighting against growing up at the beginning. All these things like her wedding seem to be coming to her very suddenly. She’s unsure about whether to make those commitments. She’s kind of ignoring her responsibilities.

What has been Megan’s way of dealing with the loss of her brother, Liam?

I think she’s been ignoring the grief. Sort of getting on with it in a way, planning the wedding. She runs a café, which keeps her very busy.

Megan and Jamie are super close, but there are hints that Megan wasn’t particularly helping with Liam’s problems. She’s a party girl herself so in a way again she was ignoring the problem – “Oh yeah, come out with me and my mates”. She wasn’t thinking that he might be struggling. So, there is a lot of blame there for not being more helpful in that situation.

What’s Megan’s café on the end of Penarth pier like?

It’s nice. I didn’t see it before production transformed it. I need to go back because Penarth pier is lovely. It’s so strange that it is so close to Cardiff, but I hadn’t been. There are so many beautiful places around Cardiff that I guess when you are from Wales you don’t really explore much. You live where you live. We went to Southerndown beach, and I thought, God, why don’t I go on more walks?

What discussions did you have with Rakie about Megan and Christine’s relationship?

There has been an element of discovery throughout. Megan is still lives at home, and she loves her mum very much but there is a certain age where you start to find faults in your own parents. Before they have been this amazing person who gives you everything and looks after you and loves you. Then all of a sudden you start seeing cracks, which I think a lot of people will relate to.

What is it that makes her such an extraordinary actor?

Just the reality she gives to each character and what she gives to other cast members regardless of whether the camera is on her or not. She can just look you in the eye and immediately you feel like you are looking into that person’s eyes. She makes really intelligent choices where I think, oh if I had that scene, I would have played it like this, and then she does it and you go, oh god that is so much of a better choice.

She does also hand out some lines of wisdom sometimes when we are all just relaxing. There is an impression as an actor that you have to do it all when you are very young or in your 20s and 30s. If you don’t make it then it’s never going to happen. Her and Lisa Palfrey talked to us once and really spun that on its head. “I didn’t act in this theatre until I was over 40. That’s when my career really started progressing.” We all were like, oh god that is such a relief. There is time! It’s not a race or a rush.

Were you able to bond in rehearsals with your screen siblings working with director Nicole Volavka?

Nicole suggested to me and Aaron, “why don’t you guys go to a museum together? We went to the pub. It is strange when it’s organised getting to know each other but we hit it off really quickly. I was also a bit shocked that although we don’t look super similar, I could see what they had done here with our heights and just the way Aaron was walking. I was like, oh God, this guy’s like me. It was really easy. I felt very comfortable very quickly with Aaron. Lloyd was in Mexico to start with, but I had worked with Lloyd previously on a programme called Tourist Trap. It’s a comedy and we didn’t actually have any scenes together, but I met him briefly.

Talking of Will, how do Megan and Jamie feel about their “big-mouthed big brother”?

There is a bit of empathy there, but I think Megan’s role in the family is to be the voice of the other brothers against Will. I don’t know whether it is because of her gender that he hasn’t gone in on her as much or that she’s just stood up more to him. She defends Jamie a lot and I imagine that’s what she did for Liam as well.

What makes Gethin the right man for Megan to marry?

In Megan’s chaos, Gethin is a stable, reliable man who is perfect for her, although she might not be able to see it because she is so in the midst of the chaos.

What choices did you make for Megan with costume?

I really like the costume that Lucille Acevedo-Jones gave for Megan at the start of the show. It’s a bit hippy – Megan loves a layer. Lots of different colours, relaxed and almost androgynous. She’s running a café so she’s not always going to be in practical clothing. The big discussion was the wedding dress. How to fit all those hippy, androgynous relaxed feels into a formal dress?

The first thing I did after I got the job was to go wedding dress shopping with Lucille. She really thinks deep into what people are wearing and makes sure that you are comfortable with it as well. The wedding dress shopping was just bizarre. There were loads of other brides waiting. The woman who was doing the fitting had obviously been trained to fit brides in a specific way, so she was still talking to me as if I was getting married although she knew it was for a TV programme. The dress that we got in the end is perfect for the character.

What has been interesting for you about portraying a Welsh dual-heritage family in a TV drama?

I don’t think I had really grasped how much this hasn’t been done before. I don’t think there has been a drama that promotes a Welsh dual heritage family. It’s normal for me because I come from a dual-heritage family. It’s not strange or new or bizarre or fresh to me. So, I hadn’t given it much thought. It’s a family. There are a few lines that mention race in the script, but in the same way as you do in real life -it comes up but it’s not the centre of the story. I think that’s really important.