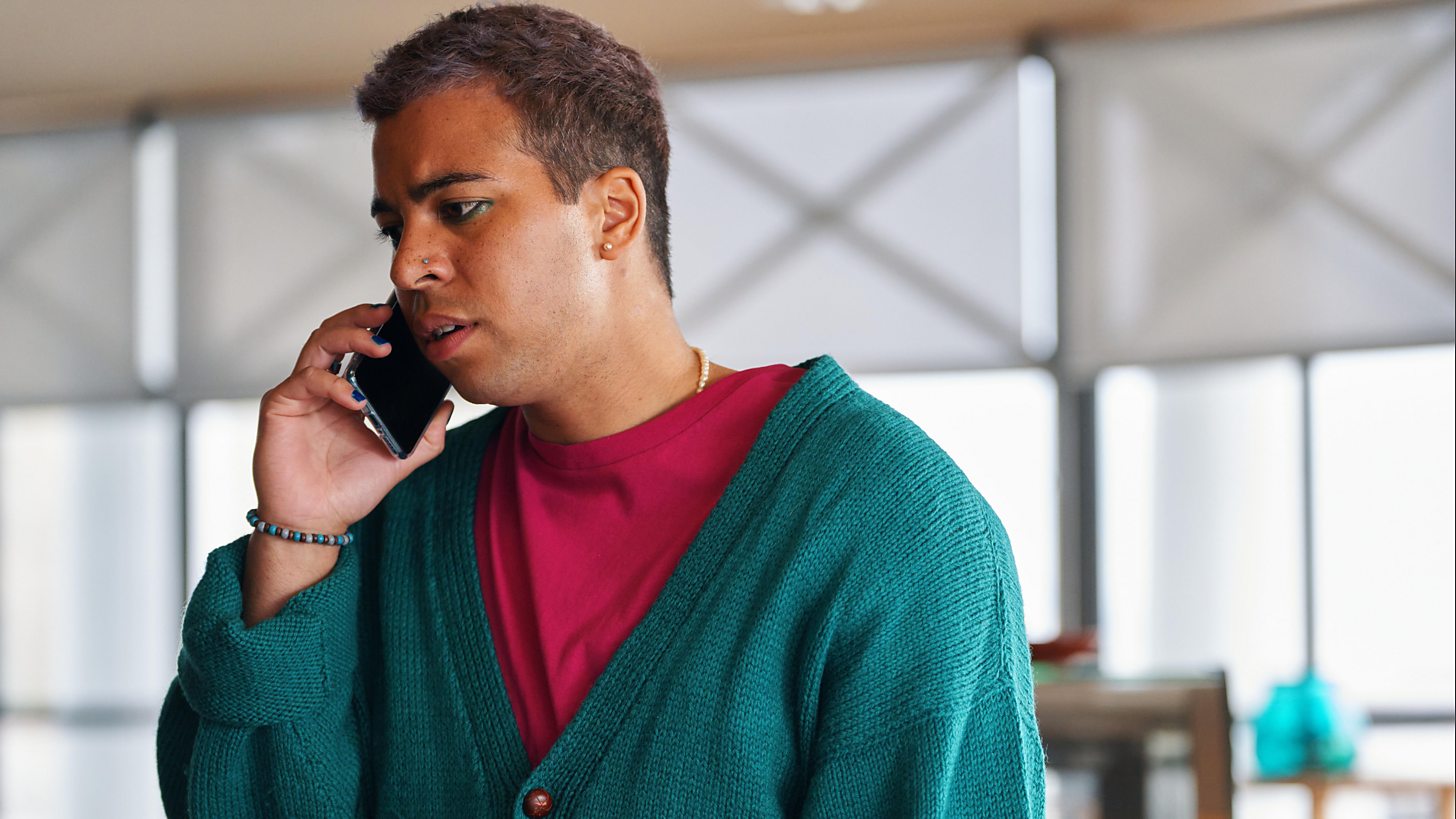 Jamie is described as kind and sensitive with painted blue nails and a slash of eyeliner. What do you love about him?

As soon as I read that description of him, I was really excited by the part. It’s nice to see a sensitive male character onscreen. He’s in his early 20s, so he is exploring that, and in this small town he is a bit of a unicorn. He’s got this pull. He’s been at university in London studying art, so he has all this expression in him. And I think that kindness really comes through in how he’s written. That’s been really fun to play.

Was there much debate as to what colour to go for with Jamie’s hair?

What actually happened was in January I had finished the previous job I was working on and I just decided to dye my hair purple. I called my agent and said to her, “just so you know…” Then the audition for The Pact came through. I was reading for a different character first of all so I sprayed my hair black for the tape. But I also read the character description for Jamie, and I said to my agent, “I really want to read for Jamie if I can. Also, I think the hair could really work for this.” So I auditioned with my purple hair and the producers said they loved it and that I could keep it for the character. So it was a really nice twist of fate.

What discussions did you have with costume about Jamie’s wardrobe?

We wanted to tell a few stories with his costume. The idea that he is coddled a little bit by his mum. There is a sense that he is very much the baby of the family. There are definitely some elements of his clothing that you feel he might have had for a while. Also, he has come back home. He is a little bit stuck. So, he wears what he feels comfortable in, and he can hide in a little bit. He also expresses himself through colours. He is probably the most colourfully dressed character. With the eyeliner and the nail varnish we talked a lot about making those things all work together. I didn’t want it to be too grungy. We are very much the TikTok/Instagram generation now. Boys wearing eyeliner is everywhere, which is so cool. So we wanted to play a lot with that.

How has Jamie been coping since Liam’s death?

Liam’s death is what really triggered Jamie’s panic attacks. I thought a lot about what Jamie might have been like before that. I think there was definitely already trauma from their dad leaving when they were very young and none of them really knowing why, and also from his relationship with Will. Ultimately, I think Jamie took a lot of solace from his relationship with Liam, so I think his death has completely tipped his world upside down.

What first drew you into the story when you read Pete McTighe’s scripts?

One of the scenes that I did for my audition is when Jamie meets Connor. I remember reading that scene and being really moved by it. You instantly go, what would you do in that situation? How would you feel? Jamie has such a powerful reaction to it. He’s the first person to meet Connor. So that instantly drew me into the story – that and the very first scene. There is so much of an enigma in Pete’s writing. You’re going, who is this person? Who do we trust? I found it gripping from the off. I could really visualise all of it and with its pace you can feel things building and brewing.

Are you a big fan of dramas that have great twists and turns?

I really am. That’s what I think makes great drama not knowing what’s coming and being able to explore this thing called life through seeing different events and situations that we might not be able to imagine, but that we can see on screen.

How is Jamie’s relationship with his mum? What discussions did you have with Rakie?

A lot of it just happened naturally. Rakie is amazing at conveying it all so strongly. She takes on that energy. Christine is described as very watchful and when you’re in a scene with Rakie she is kind of hypnotic. In the best possible way there were moments where she might see me flailing or not doing what she knew I wanted to be doing and she would just kind of direct me with her eyes.

One scene that I was really struggling with we had been doing it all morning and then my close-up was after lunch. It was a very emotional scene, a long scene as well. Going after lunch is always a bit harder because you have to get back into the rhythm. I wasn’t getting back to the place that I had been in for the previous shots. Rakie said, “Would it help if I gave you a hug?” So she gave me a hug in character and that just got me to exactly where I needed to be in the scene. That’s how it’s worked, rather than having lots of pre-arranged conversations.

What work did you do to achieve Jamie’s Cardiff accent?

I worked with a dialect coach called Patricia Logue, who I have worked with before. We did a play in Cardiff at the Sherman Theatre with her directing. It was great when I found out that she was the dialect coach on this. She’s brilliant. I’ve moved around a lot, so my accent really switches depending on who I’m talking to. It was one of those things when I auditioned for Jamie that I did whatever naturally came out. You don’t always have a lot of time for prep. So I’ve just really developed that. It’s semi-based on Mali’s accent as well because she’s from Cardiff. I did a lot of listening to her. We did a family dialect session.

What has been your favourite location?

Margam Park in Port Talbot where we shot the wedding scenes. The set design for the wedding and the marquee is really cool. There is a big church with this huge stained-glass window overlooking a graveyard. That’s where Liam’s grave is. And there are these ruins. I think it’s going to look awesome, gothic and dramatic but contrasted by this wedding going on as well.

Apart from all the great twists and turns, what do you hope stays with the audience?

I hope what stays with people is that life and family are complicated. Unfortunately we all have trauma, and tragic, seismic events in our lives – It’s how we get through those together. Those are some of my favourite moments in the story when they are able to connect with each other no matter how fractious their relationships are. Also I’m just so intrigued to see what people really think of the characters, especially Christine. My takeaway from her is that she has given so much. There is a lot of love in what she’s done but she is a very complex person. I love how layered that is.