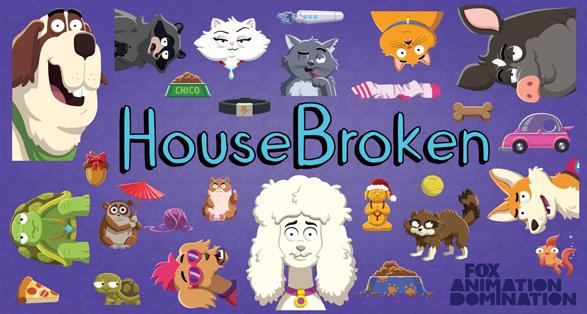 HouseBroken Tonight “Who’s Found Themselves In One Of Those Magical Christmas Life Swap Switcharoos?”

Honey’s holiday wish comes true when a mix-up at the vet sends her to a dream home, while her idiotic doppelganger goes to live with Chief. Meanwhile, Max has to hide from his new owner David Spade when he discovers that Spade wants to make him the holiday ham. Then, in the next half hour, Honey and Chief are home alone for the holidays, and when a mysterious intruder tries to break in, they team up with Raccoon to protect the family home.

“HouseBroken” is an animated series that takes an irreverent look at human behavior through the lens of animals. The animals’ search for meaning often leads them on wild adventures, far away from the cushy confines of domestic pet life. Honey, a standard poodle, leads the group, encouraging them to confront their issues. The animals include Shel, a sex-positive tortoise with intimacy issues and a knack for choosing unconventional partners; Tabitha, an aging Persian cat beauty queen who is trying to adjust to life off the cat show circuit; The Gray One, a street smart cat who lives with about 30 other cats and has his one eye on Tabitha; Chico, a chonky, co-dependent cat who is in an unhealthy relationship with his neglectful owner; Diablo, a sweater-wearing, anxious terrier with OCD tendencies; Max, a social-climbing Hollywood pig formerly owned by George Clooney; and Chief, a dopey St. Bernard who lives with Honey and enjoys tormenting squirrels and licking himself.