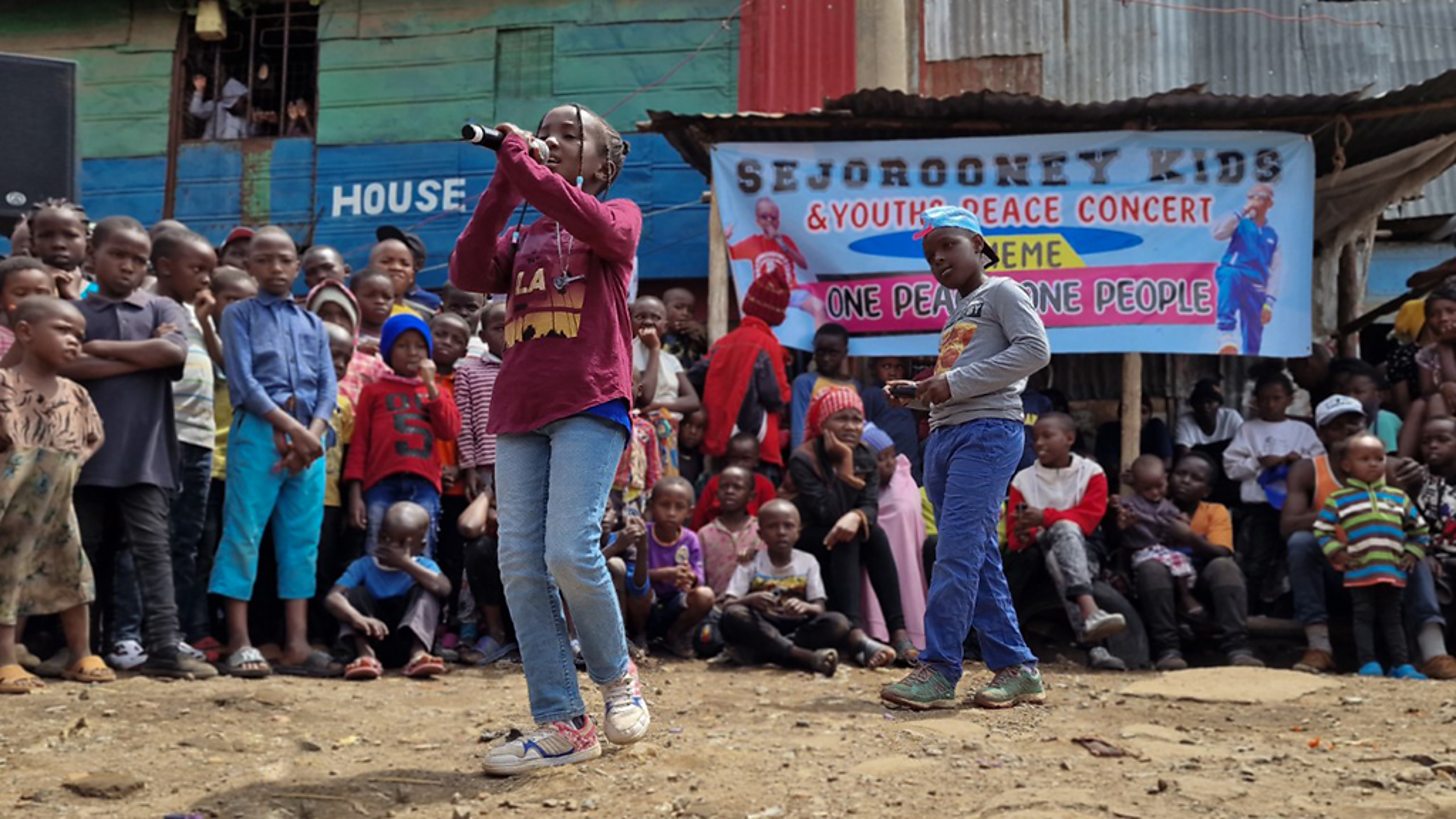 New series focusing on the environment, local history and world stories have been commissioned by BBC Children’s for CBBC and CBeebies.

The titles include a new series with Steve Backshall, Deadly Mission Shark which takes an educational deep dive into the plight of sharks, a trip around the UK for a close up look at pioneering nature projects in OZT Goes Wild in Britain, new My Life films that focus on single stories from Ukraine, Kenya to Peru and a fascinating history through objects series based in Cornwall called Treasure Tales.

Patricia Hidalgo, Director of Children’s and Education, says: “Learning is one of BBC Children’s core values and we want our programmes with educational themes to highlight great stories and to be fun and light-hearted for our audience. Factual Entertainment is a great way to do that and these new commissions are great additions to our existing shows and means we are offering the broadest range of content for children.”

Friends Fred and Pete live in the pretty Cornish village of Port Isaac and spend their days hunting for treasures. From mysterious hats to burnt buckets, pages of a diary to a broken telescope, each object has a story that Fred and Pete bring to life when they go on an adventure to discover more about the treasure’s secrets.

Helping them on the way is Suzy who runs the Museum of Cornish Treasures in Post Isaac. Suzy knows a thing or two about the history of Cornwall and is on hand to offer pointers to the friends about how they can find out more about their discoveries and once the history of the item is unearthed, it may even end up on display in her museum.

With challenges, songs and capers along the way, the items bring stories to life to provide a potted history lesson of the region in a fun, accessible way for children.

Treasure Tales is a 30 x 14 series produced by Screen Glue Ltd. It was commissioned by Kate Morton, Head of BBC Children’s Commissioning and Acquisitions, 0-6, and the Commissioning Executive for the BBC is Nick Hall. The Executive producer is Jasper James.

With 70% of Oceanic Sharks lost in the last 50 years, sharks are heading for extinction and a generation of new shark advocates is needed.

In this 10-part series from BBC Studios for CBBC, Steve Backshall leads ordinary kids from the UK and the Bahamas on a mission to save the World’s Sharks.

Under Steve’s tutelage, 8 children will be chosen to undertake a 10 day bootcamp at a shark sanctuary in the Bahamas where they will learn about the challenges sharks face and how they could help save them in the future.

During the bootcamp, the team will learn how to dive and how to interact with sharks. They will get hands-on with conservation projects, meet marine biologists and learn about shark habitats before immersing themselves into Bahamian culture.

Deadly Mission Shark is a 10 x 30 mins series produced by BBC Studios. It was commissioned by Sarah Muller, Head of BBC Children’s Commissioning and Acquisitions, 7+, and the Commissioning Editor for the BBC is Melissa Hardinge. The Executive producer is Jo Shinner from BBC Studios’ Natural History Unit.

Join the Whitnall brothers (Aaron, Tyler and Cam) as they travel the length and breadth of Britain in their electric vehicle to get up close to British wildlife – past and present – and champion conservation projects and rewilding initiatives across the country.

From locally extinct species like wolves and bears, to those who have suffered catastrophic population losses like hedgehogs, red squirrels, and red kites, they’ll find out about the issues that have caused these animals’ demise: from the rise of agriculture and industrialisation to the spread of our towns and cities. They’ll discover what is being done to help these animals and make Britain a safer place for wildlife and demonstrate smaller projects that you can do at home to help.

Featuring guests and a studio audience made up of up children, this 5 x 22 series from True To Nature will feature stories that look at animals in different habitats and conservation projects across the UK; from woodland to coast and wetland to urban spaces. In addition, they will demonstrate a range of top tips, DIY projects, and eco hacks for children and their families to try at home.

OZT Goes Wild in Britain is a 5 x 22 mins series produced by True to Nature Ltd. It was commissioned by Sarah Muller, Head of BBC Children’s Commissioning and Acquisitions, 7+, and the Commissioning Editor for the BBC is Melissa Hardinge and the Executive producer is Wendy Darke.

A set of new single documentary films that follow the highs and lows of children across the world, each with a unique story to tell.

My Life: Child of the Wild

This episode follows the epic journey by boat, jeep and plane of 12-year-old Geremias who lives in a remote indigenous village in the Peruvian Amazon. An avid fisherman, Geremias is as at ease negotiating the rapids on the river beside his home in Palatoa. And fish aren’t the only food he hunts – we see him digging up a local delicacy of giant wriggling larvae called suris, for his family’s dinner. But Geremias’ life takes an unexpected turn when he and his dad are invited by a visiting fisherman to Lima, the Peruvian capital (over 800 miles away) to see the ocean for the first time.

According to the latest figures*, over two thirds of Ukraine’s children have now become displaced. In My Life: Leaving Home, we follow the stories of four of them: Anna (8), Sacha (10), Lera (15) and Sophia (16).

In a matter of minutes, these children had to pack their bags, unsure if they’d ever be returning and with little idea of where they were going. Within hours, they had lost almost everything familiar to them – their homes, their fathers, their pets and their friends as they rushed to escape the bombing.

So, what is their understanding of the events that forced them to flee? What do they think the future holds for them and what do they make of their lives turned upside down?

Through their testimony and by witnessing how they are living today, we go beyond the accounts of the war itself and discover how these children – one only eight years old- have found a resilience they never knew they had and above all, a way to cling on to hope.

*Figures are from Unicef

My Life: I won’t stand for it

Miyawata is a 15-year old Indigenous activist from Winnipeg, Canada, who never hesitates to speak up for what she believes in. She refuses to stand for the Canadian National Anthem played every morning at her school, in protest at the injustices her people have faced throughout the history of Canada – she’s on a mission to help Indigenous voices be heard and included. Myawata is the first organiser of school strikes for the climate in her hometown of Winnipeg but then COVID hit. Now she wants to get the movement going again as there is so much at stake

14 -year old Jamie dreams of becoming a fisherman working alongside his dad. Following him across all four seasons, we’ll discover what it’s like living as part of a tiny coastal community in Cornwall’s last traditional fishing village. Through spring and summer to autumn and winter, this film is a celebration of Cornish fishing life but doesn’t shy away from the sometimes tough realities. As the oceans heat up and the storms get wilder, the stability of a traditional fishing career is under threat, so Jamie considers casting his net wider to pursue a sporting life. His heart is at sea but is this Jamie’s future?

My Life: Rapping for Change

Young Fortune and Juala Superboy are eight-year-old singer-rappers born and raised in Mathare, a vibrant place but one of the biggest slum areas, in Kenya. Life here is full of challenges, from poverty to plastic pollution. Determined to tell people everywhere about their home town, they’ve come together to write a new song all about the heroes in Mathare and the struggles they face every day. The kids travel around town as they head to record their new song, attend a music workshop with their friends, perform their new song for the first time in front of a big audience, and even see amazing wildlife in Nairobi National Park. Their dream is to have their song heard by people outside of Nairobi but will they manage to get it played on one of the most famous radio stations in Africa?

Isabell is a 2 times national championship boxer. She has won all 8 belts that she has competed for and now signed up with the England Youth Boxing Team, ready to go Pro when she turns 18. Isabell is from the Gypsy Romany and Traveller (GRT) community, where women’s boxing goes against the grain, and through the backlash, she has stayed strong and continued to fight her way to the top. She believes that all girls, including those from the Gypsy community should be able to build a career, and not just settle down and get married. We follow her story as she pushes boundaries in her community.

My Life: Eva’s Having a Ball

Comedian Eva Abley is an inspiration. The hugely popular Britain’s Got Talent finalist wants to capitalise on her new-found fame by putting on a Ball to raise money for Birmingham Children’s Hospital, and campaigning for the rights of disabled children. Eva has cerebral palsy, and wants to give back to the hospital where she’s spent much of her childhood, and still has regular operations for her painful, stiff muscles.

We’ll be with Eva as she plans and prepares and of course at the Ball itself where some famous faces are sure to turn up!