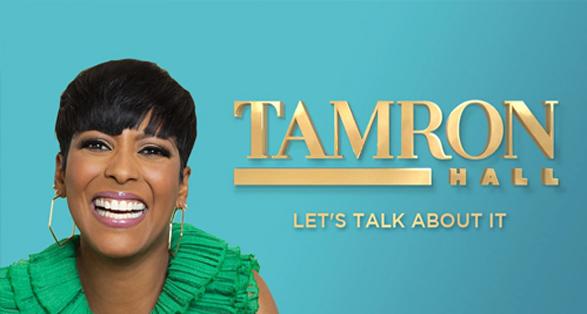 Monday, Dec. 5: LOST & FOUND: Tamron shares inspiring stories of those who achieved happiness after something meaningful in their lives were lost and found, including Billboard chart-topper KITT WAKELEY, whose new GRAMMY®-nominated album, “An Adoption Story,” tells how he was reunited with his sister 40 years after they were separated in foster care. Plus, a daytime exclusive interview with pop icon TAYLOR DAYNE, who opens up about her battle against colon cancer.

The “Tamron Hall Show” airs weekdays on ABC. From the deeply moving to the purely fun, “Tamron Hall Show” is a daily destination for all things topical and a platform for viewers to connect with the people who are shaping our world through meaningful, engaging, and entertaining conversations. As a new mom, a newlywed, and a survivor who is proving you can accomplish anything at any age, Tamron Hall brings a refreshing, relatable, unpredictable, and unstoppable voice to television.

Tuesday, Dec. 6: LIVING LIFE LIKE IT’S GOLDEN: The multitalented JILL SCOTT stops by, and Tamron shares how the GRAMMY Award-winner inspired this season’s “Golden Hour.” Actress GRACE DUAH stops by to discuss her career path that led her to a series regular on “Gossip Girl.” Plus, an all-new Shop Tam Fam!